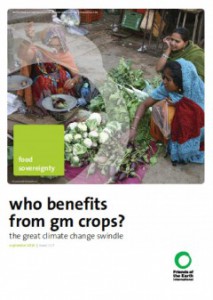 In Africa, heavy industrial lobbying, amongst which GM crops, is answered with increasingly investigating alternative agricultural solutions, based on local knowledge and research to find more sustainable solutions. Agro-ecology seems in the winning mood.

Only in three African countries GM crops are grown: in South-Africa, Burkina Faso and Sudan. This is only 0.54% of all arable land.

But Africa doesn’t want it. So the recent report of Friends of the Earth ‘Who Benefits from GM Crops?’ seems not of great importance to Africa, one could conclude.

On the other hand, it is interesting to read about the extreme pressure on the acceptation of GM crops in African countries.

The biotech industry is working on ways to add vitamin A and other micronutrients to cassava, sweet potato, sorghum and other African staple crops. The industry has ambitions to extend its market into Africa, with the development of other nutrient-enhanced GM crops, according to the report.

Kenya, in the meantime, decided to introduce a ban on GM. Industry associations reacted with heavy lobbying against this decision.

While reading the report, it seems a fierce battle is going between the introduction and the rejection of GM.

Hans Herren, winner of the World Food Prize and Alternative Nobel Prize, mentions that such approaches have revealed far greater success, in terms of increasing yields and pest control.

Again, the report mentions Kenya as an example. Studies in this country show that agro-ecological intensification methods are able to successfully increase rice yields by as much as a third.

Debts because of inputs

One of the reasons to fight against the GM introduction is the rising costs of seeds and inputs. This is especially a problem for small farmers, of whom many already struggle with debts.

A study found that, because of these high costs, in Burkina Faso the risks of GM cotton production were ‘disproportionately high’. Many farmers get into debt because of the cost of the seeds and inputs needed.