Water is life. Motion is energy. This means: running water is life and energy. With this vision and some technical skills, a revolutionary innovation is born. A technique that makes water pump itself up out of a river. 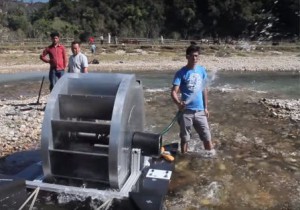 Once upon a time, not so long ago, there lived a young farmer’s son in the steep hills of Nepal. The small farmyard was located next to a streaming river full of fresh vivid water. Although there was plenty of water, his father’s crops where running dry. To get them irrigated, a lot of water needed to be taken from the river, several meters below field level.

There are different ways to get the water: with a bucket, which costs a lot of efforts, or with a pump. But also a pump needs a lot of energy, weather it is diesel, electricity or even manual labour.

The boy grew up to become an engineer and he kept on thinking of this energy problem. Why in the first place was it necessary to bring energy to a river with running water? The stream delivers a lot of energy from itself!

With a water wheel for example, one can produce energy. And with energy, one can pump water. Thinking in this direction, the young engineer thought there should be an easy way to pump up the water directly, without producing energy first.

This philosophy became the birth of the Barsha pump. A pump that uses only the energy of the stream to make water run uphill.

The Nepalese engineer became a cofounder of the Dutch engineering company aQysta. Together they managed to developed a pump which is driven by the motion of the running water. The innovation is as simple as effective. And that’s why it can be considered as revolutionary.

The Barsha pump is easy to operate and the simple technique makes the pump not expensive, both in purchase and in maintenance. In arid area’s and dry seasons, it won’t be difficult to double the yield. And to return the investment in 18 months. The only condition that’s needed is a running river close to the field.

Farming Africa talked to Lennart Budelman, managing director of aQysta. The development of the pump is now fully completed, he tells.

From the start, seven pumps where installed in Nepal and five in Indonesia. The 21 first fully completed commercial pumps will also be shipped to Nepal and running in February. Three pumps will be demonstrated in Turkey and soon the very first Barsha pump of Africa will be running in Zambia.

aQysta is about to spread the innovation throughout the world. If their plans will succeed, the pump will be sold all over Africa. Budelmann: ‘I am very excited about the potential of our pump for Africa.’

One Response to "The Barsha pump: a revolutionairy innovation that makes water run uphill"