It’s told often on this weblog and I will tell it again: Small scaled farming employs many people. It brings food safety and it prevents urbanization. Small scaled farms can develop and increase production, but they cannot set halt to massive imports that destroy agriculture. For this, a big farming company can be a solution, tells my colleague Jean Armand Bokally in this special report. Like, for example, this mammoth broiler project in Gabon. 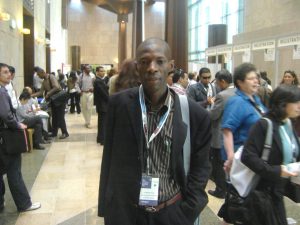 A plot of 160 hectares has been granted by the Gabonese government to the Indian company l7H Life Resources Overseas Pvt Ltd for the development of an integrated poultry project, for production from 2000 to 10,000 tons of broiler chickens month.

The campaign promise of the candidate Ali Bongo Ondimba during the 2009 presidential election that brought him to the head of this small oil country of Central Africa, populated with just 1.5 million inhabitants is gradually underway, to achieve food self-sufficiency to access this emerging country. Contacts in this direction were taken during the recent India-Africa summit, which was held from 26 to 29 October 2015 in New Delhi, India by the Gabonese head of state. L7H Life Resources Overseas Pvt Ltd. an Indian company specializing in the development of large farms, food processing, animal husbandry, poultry processing and food, but also infrastructure development has been contacted by the Gabonese authorities to invest in broilers.

Under an agreement signed with the Gabonese State last 19 November 2015 in Libreville, the Gabonese capital, the Indian company will invest in the course of this year 2016, USD 60 million or approximately CFAF 30 billion in the chicken industry. The envelope will develop a poultry project in the Special Economic Zone (SEZ) Nkok, a periphery of Libreville, through investments in the field of breeding, the purchase of incubators, the installation of an animal feed manufacturing and marketing unit of broilers packed or not. The document was countersigned by Mathieu Mboumba Nziengui (Minister of State, Minister of Agriculture and agricultural entrepreneurship, responsible for the implementation of the Seed Program), Gabriel Tchango (Minister of State, Minister for Fisheries and Livestock), Regis Immongault Tatagani (Minister of Sustainable Development, Economy, Investment Promotion and Planning) and Rufin Moussavou (Minister of Mines and Industry) and companies l7H Life Resources Overseas Pvt Ltd and Gabon Special Economic Zone (GSEZ) S.A.

Nkok, the area that is chosen by the Gabonese part is an environment for the development of such activity with over 80 national and international companies already installed.

With this initiative, the country intends to develop sustainably, the poultry sector and significantly reduce imports of frozen chicken and also create direct and indirect jobs. Because in the context of social responsibility related to that project, nearly 200 booths of 30 m2 each will be awarded to women for the retail sale of poultry products.

The chicken is greatly consumed in Gabon. However, it is imported from France, Brazil and the United States. The country does not have a firm able to meet domestic demand as the country enjoys a favorable climate and availability of funds for the development of the poultry sector. Indeed, Gabon annually imports more than 44 000 t of poultry meat to a value greater than 26 billion FCFA. Local production should be a significant source of job and wealth creation not to mention food security that this would provide.

La Société meunière Agricole du Gabon (SMAG), a subsidiary of SOMDIAA group, previously thought to be the number 1 breeding in Gabon, works alone to remedy the situation. SMAG Gabon produces and markets about 40 million eggs per year under the brand COCO NTO. Since 2011, the SMAG also raises the day-old chicks primarily intended his laying hens and its breeders clients. Production is estimated at 350,000 chicks per year. Gabon is still dependent on more than 70% of its food needs in all sectors, through expensive imports.

In the long term, the Gabonese government will provide to l7H Life Resources Overseas Pvt Ltd about 1 600 ha for the development of maize farms for chicken feed, says one.

5 Responses to "Gabon will end massive imports of broilers"