A conflict about the ownership of land means a big struggle for small scaled farmers. Kizito Makoye gives us a good example from Tanzania where a long desired piece of paper brought clarity and piece, Thanks to the Farm Africa initiative Land Mapping. 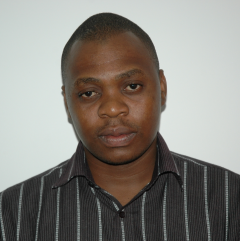 Katrina Hhaynihhi and her husband Simon must be very gratefull to Farm Africa and their Land Mapping initiative.

They could not be more proud of the piece of paper held tightly in their hands: a title deed which not only proves they are sole owners of their land but also ends a simmering dispute with their neighbours.

The couple are crop farmers and eke out a living on a small holding growing beans and maize in Tanzania’s northern Mbulu district.

For years they battled a neighbour who insisted on grazing his animals onto their land. ‘This document means a lot to us. Our land is now secured and we do not expect any conflicts with our neighbours,’ said Katrina. 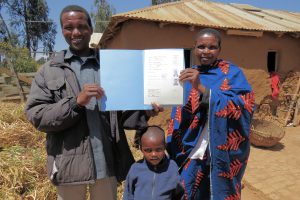 The title which has brought peace to the Hhaynihhi family is known as a Certificate of Customary Right of Occupancy (CCRO) document.

‘There used to be lots of disagreements around grazing and the (herders) use of forests and water sources. Those issues have been solved,’ the mother of six told the Thomson Reuters Foundation.

The Hhaynihhi family grow a variety of crops including sunflower seed. On their 11 acre farm they earn around Tanzanian shillings 5 million (€2,000,-) a year.

For them, a land title has made a big difference. It provides a sense of security which means they have invested more into their farm.

‘This land title has given us the confidence to carry out different farming activities to boost our income’, said Katrina. ‘And we don’t consume everything we produce. We sell some of our crops to get money.’

Katrina, 48, and Simon, 46, are just two of several hundred farmers in the Mb 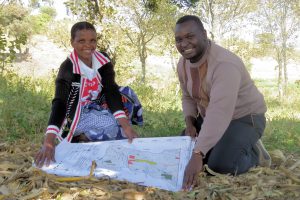 Land registration in Tanzania is inefficient but can also be corrupt, according to Transparency International’s 2014 Global Corruption Barometer.

While farmers across the country have used swathes of land for growing crops over many years, most do not have any documented evidence to prove that it is theirs, Farm Africa analysts said.

Without adequate tenure or security, farmers are not only less likely to invest in their land but also become vulnerable to powerful outsiders. Outsiders who have been found to collude with corrupt village leaders to seize property, the charity has found.

Beatrice Muliahela, Farm Africa’s project coordinator, said securing village land is necessary to empower rural communities. This because it gives them strong legal protection. Both for the land itself, but also the resources that lie on it.

‘When the land is clearly demarcated, it makes it easier to agree who has the right to what,’ she told the Thomson Reuters Foundation.

According to Muliahela, since its launch two years ago, the project has resolved several land-related disputes. Most sparked by the expansion of agriculture and dwindling water and forest resources.

Katrina Hhaynihhi says the land mapping project has changed her community. It helps local people to understand the importance of conserving the environment and to take care of the land.

Previously, she said, very few villagers had the skills to address problems such as soil erosion and falling water levels. Now they have established a village environmental committee to take care of surrounding resources.

A by-law has also been put in place to ensure that farmers are aware of no-go areas for grazing animals. Also forest land is marked out clearly so those with livestock have their own areas.

Thomas Mbaga, Farm Africa’s project officer, said the villagers participated in creating the land use plan and the by-laws are approved by the village assembly.

Tanzania’s Village Land Act of 1999 empowers village councils to make decisions on land use. This ties in with Farm Africa’s aim to forge joint partnerships between villagers and local authorities on forest management.

Mbaga said land titles or CCROs have helped villagers to access loans and get capital to invest in their businesses. This helps them learning income generating techniques that are environmentally sensitive such as re-planting when trees are felled.

‘It is very hard to graze around or near water sources these days’ said Katrina, who is a member of the village environmental committee.

‘If we had not received support from Farm Africa our lives would be worse because the forest cover would perish through trees felling and grazing.’